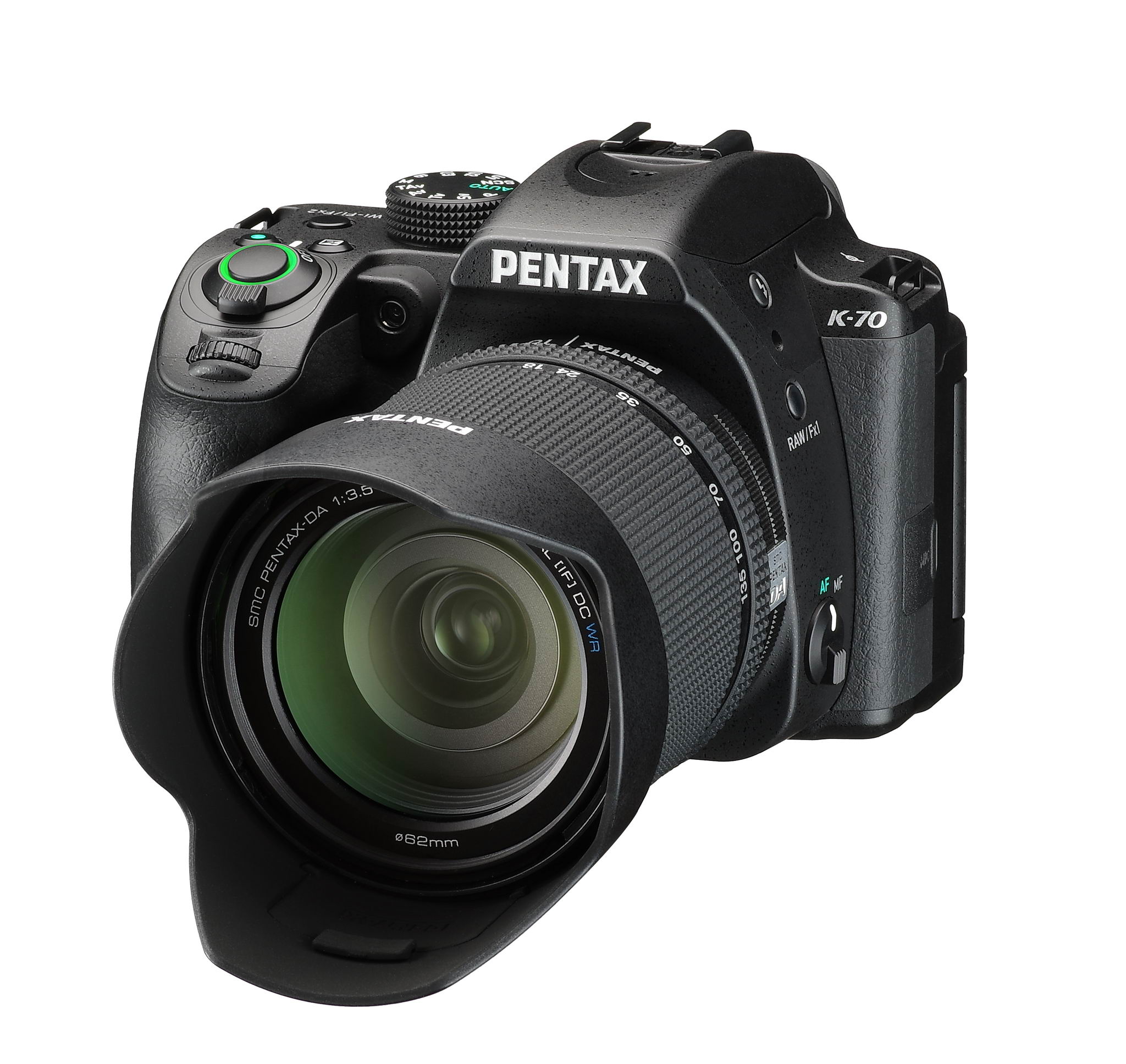 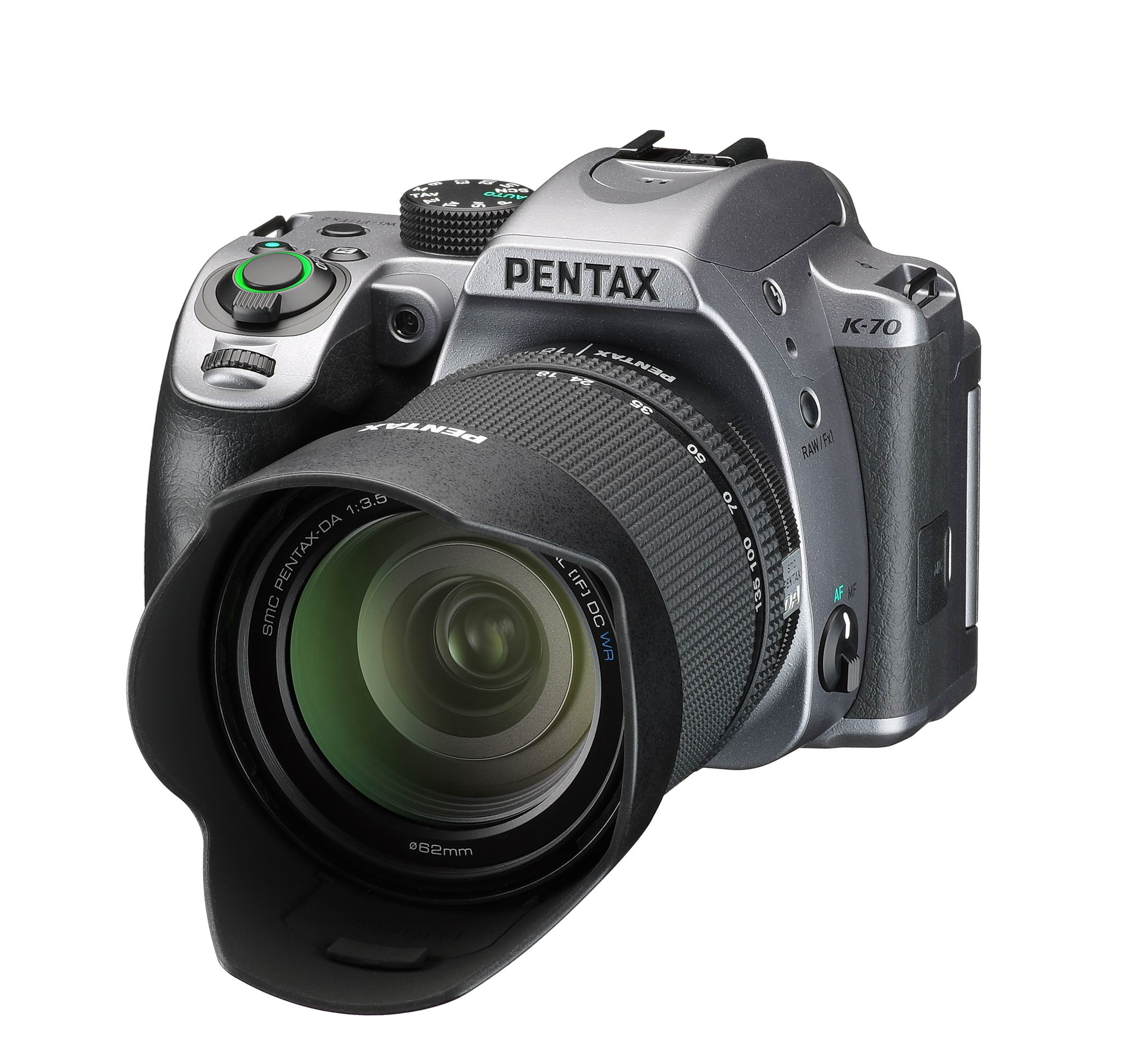 RICOH IMAGING COMPANY, LTD. is pleased to announce the launch of the PENTAX K-70 digital SLR camera. Within a compact, dustproof and weather-resistant body designed for all types of outdoor photography, this standard-class model provides a host of advanced, user-friendly features available only in upper-level models.

The PENTAX K-70 is designed to be an all-weather camera, thanks to its outstanding dustproof, weather-resistant construction and dependable cold-proof performance down to temperatures as low as -10°C. It incorporates a newly developed accelerator unit, which performs high-level noise processing in collaboration with the PRIME MII imaging engine and allows super-high-sensitivity photography at a top sensitivity of ISO 102400. It also features a new Hybrid AF system, which harmonizes the advantages of both the image-plane phase-matching AF system and the contrast detection AF system, in order to assure the maximum speed and accuracy of AF operations during Live View shooting. It even provides a range of advanced, upper-class-equivalent features, including the PENTAX-developed Pixel Shift Resolution System; an innovative AA (anti-aliasing) filter simulator with the same moiré reduction effect as an optical AA filter; an optical viewfinder with nearly 100 percent field of view; and an in-body shake reduction mechanism with a shake reduction effect equivalent to approximately 4.5 shutter steps. For remote shooting operation and easy transfer of captured images to smartphones and tablet computers, it also features a built-in wireless LAN (Wi-Fi) module.

The PENTAX K-70's exterior is designed with comfortable outdoor operations in mind. It provides such user-friendly features as a newly designed grip providing firm hold of the camera body even with a gloved hand, and redesigned mode dial and control buttons on the camera's top and back panels to assure exceptional operability. It also comes equipped with an outdoor-friendly LCD monitor whose brightness level can be instantly adjusted to the lighting level of a shooting location.

1. Super-high-resolution images captured with approximately 24.24 effective megapixels and at ISO 102400

The PENTAX K-70 is a dependable performer even in such demanding settings as in the rain or at locations prone to dust and freezing temperatures, because it combines a compact, easy-to-carry body with a dustproof, weather-resistant construction and outstanding cold-proof performance at temperatures down to -10°C. It has also been designed for active outdoor shooting -- such as mountain climbing, camping and sporting events. This was accomplished by improving its operability, with a new grip design that provides firm hold of the camera body even with a gloved hand, and through a complete design review of the mode dial and control buttons. In addition to its outdoor-friendly LCD monitor, whose brightness level can be instantly adjusted to the lighting level of a shooting location, it also features a red-lighted monitor display function, which works friendly to the photographer's eye when it has become accustomed to a dark location during astronomical photography.

The PENTAX K-70 features the high-precision SAFOX X AF sensor module, which assures responsive, dependable autofocus operation. With its 11 sensors including nine cross-type sensors in the middle, this AF module assures pinpoint focus on the subject at a minimum brightness level as low as -3 EV. By revising the timing of the AF sensor's start-up action, the speed of autofocus response has been improved, especially at low-illumination levels. Also, by improving the algorithm for moving objects, the focusing accuracy in the AF-C mode has been enhanced. The PENTAX K-70 even assures outstanding AF tracking performance with subjects on the move, thanks to such advanced features as the Select-area Expansion function, which automatically refocuses on a moving subject after it moves away from the initial point, with the help of the neighboring points; and an AF Hold function that maintains the initial in-focus point even when the module loses sight of the subject.

(1) In-body SR mechanism
Thanks to the built-in PENTAX-original SR (Shake Reduction) mechanism, the PENTAX K-70 effectively minimizes camera shake and delivers sharp, blur-free images, even in camera-shake-prone conditions such as when using a telephoto lens, shooting low-light scenes with incident light only, or photographing sunset scenes. Using a high-accuracy gyro sensor, it provides a compensation effect of 4.5 shutter steps, a level close to that of upper-class models. When taking a panning shot, this mechanism automatically detects the direction of the camera's movement, and efficiently controls the SR unit to produce the best image possible without requiring any mode switching operation.

(2) Pixel Shift Resolution System with motion correction function
The PENTAX K-70 features the latest super-resolution technology called Pixel Shift Resolution System,* which captures four images of the same scene by shifting the image sensor by a single pixel for each image, then synthesizes them into a single composite image. Compared to the conventional Bayer system, in which each pixel has only a single color data unit, this innovative system obtains all color data in each pixel to deliver super-high-resolution images with far more truthful colors and much finer details than those produced by conventional APS-C-size image sensors. This system even provides a motion correction function,** which automatically detects a moving object during continuous shooting and minimizes negative effects during the synthesizing process, in order to accommodate a wider range of scenes and subjects.

(3) Innovative AA filter simulator to minimize moiré
By applying microscopic vibrations to the image sensor unit at the sub-pixel level during image exposure, the PENTAX K-70's AA (anti-aliasing) filter simulator*** provides the same level of moiré reduction as an optical AA filter. Unlike an optical AA filter, which always creates the identical result, this innovative simulator lets the user switch the AA filter effect on and off, and adjust the level of the effect. This means that the ideal effect can be set for a particular scene or subject based on the current photographic conditions.

(4) Supportive shooting functions
Since the PENTAX K-70's SR unit has a flexible design that tilts the image sensor unit in all directions, it provides a host of handy shooting functions, including ASTRO TRACER, which simplifies advanced astronomical photography in combination with an optional O-GPS1 GPS Unit.

* When using this system, the user is advised to stabilize the camera firmly on a tripod. When a moving subject is captured in the camera's image field, its image may not be reproduced clearly, either in part or as a whole.

** The movement may not be sufficiently corrected when the object is moving in a certain direction and/or pattern. This function does not guarantee that the movement is properly corrected with all subjects.

*** This function works most effectively with a shutter speed of 1/1000 second or slower. This function may not be combined with some shooting modes, including the Pixel Shift Resolution system.

Within its compact body, the PENTAX K-70 incorporates a glass prism finder featuring the same optics and coatings as those used in higher-level models. With a nearly 100-percent field of view and a magnification of approximately 0.95 times, it provides a wide, bright image field for easy focusing and framing.

With a top shutter speed of 1/6000 second, the PENTAX K-70 captures sharply focused images, even with fast-moving subjects. Coupled with its high-speed continuous shooting function with a top speed of approximately six images per second, it lets the photographer preserve once-in-a-lifetime shutter opportunities in beautifully focused images.

The PENTAX K-70 captures high-resolution, flawless Full HD movie clips (1920 x 1080 pixels; 60i/30p frame rate) in the H.264 recording format, and records lively stereo sound using a built-in stereo microphone. In combination with compatible lenses, it allows the user to use the Continuous AF (AF-C) mode* to keep accurate focus on a moving subject, or take advantage of a new aperture control function** to automatically assure a proper exposure level even in fluctuating lighting conditions during movie recording. It also provides a host of distinctive visual effects for movie production, including the 4K Interval Movie mode that connects a series of 4K-resolution still images at a fixed interval to create a single movie file, and a Star Stream mode to fade in and out the traces of stars to recorded movies.

** During movie recording, the aperture control function is available only in combination with the HD PENTAX-DA 55-300mm F4.5-6.3ED PLM WR RE lens.

9. Vari-angle LCD monitor for easy image viewing from all angles

Since the PENTAX K-70's vari-angle LCD monitor allows for the positioning of the monitor at any desired angle, it makes it easier to compose the image in a wide variety of applications, such as high-angle shooting using stretched arms or low-angle shots taken from ground level. It also features a unique air-gapless construction, in which the air space between LCD layers is eliminated to effectively reduce the reflection and dispersion of light for improved visibility during outdoor shooting.

10. An array of functional customization options

The PENTAX K-70 allows a choice of menu items and the order of their listing displayed on the control panel, so that the user can confirm or change the listed functions and their current settings at a glance. The user can also assign one of the seven functions to each of two Fx (Function) buttons. The PENTAX K-70 also provides three USER modes, to which the user can assign desired camera settings depending on subject types or creative intentions. Three settings (CLEAR TONE, HDR LANDSCAPE and ASTROPHOTO) are preprogrammed in the camera as default.

The PENTAX K-70 provides a host of wireless LAN (Wi-Fi) functions to support operations using smartphones and tablet computers. By installing the dedicated Image Sync application in a mobile device, the user can remotely check the Live View image, capture still images, and adjust such camera settings as aperture, shutter speed and ISO sensitivity to the desired level through the mobile device. It is even possible to download captured images onto the mobile device, then upload them on social networking service websites.

Attached to the PENTAX K-70's microphone terminal, this one-meter-long cable switch helps prevent camera shake when using a macro or telephoto lens, since it allows the user to release the camera's shutter without touching it. When the user presses the CS-310's shutter release button lightly, the camera's exposure meter and autofocus system are activated. Pressing it all the way down releases the shutter. For extended exposures in the Bulb mode, the user can keep the shutter open by sliding the shutter release button to the HOLD position while depressing it.

Notes:
• The CS-310 cannot be used with cameras designed to accept conventional cable switches.
• The PENTAX K-70 does not accept cable switches other than the CS-310.

♦ All other brands or product names mentioned herein are trademarks or registered trademarks of their respective companies.
♦ Designs and specifications are subjects to change without notice.