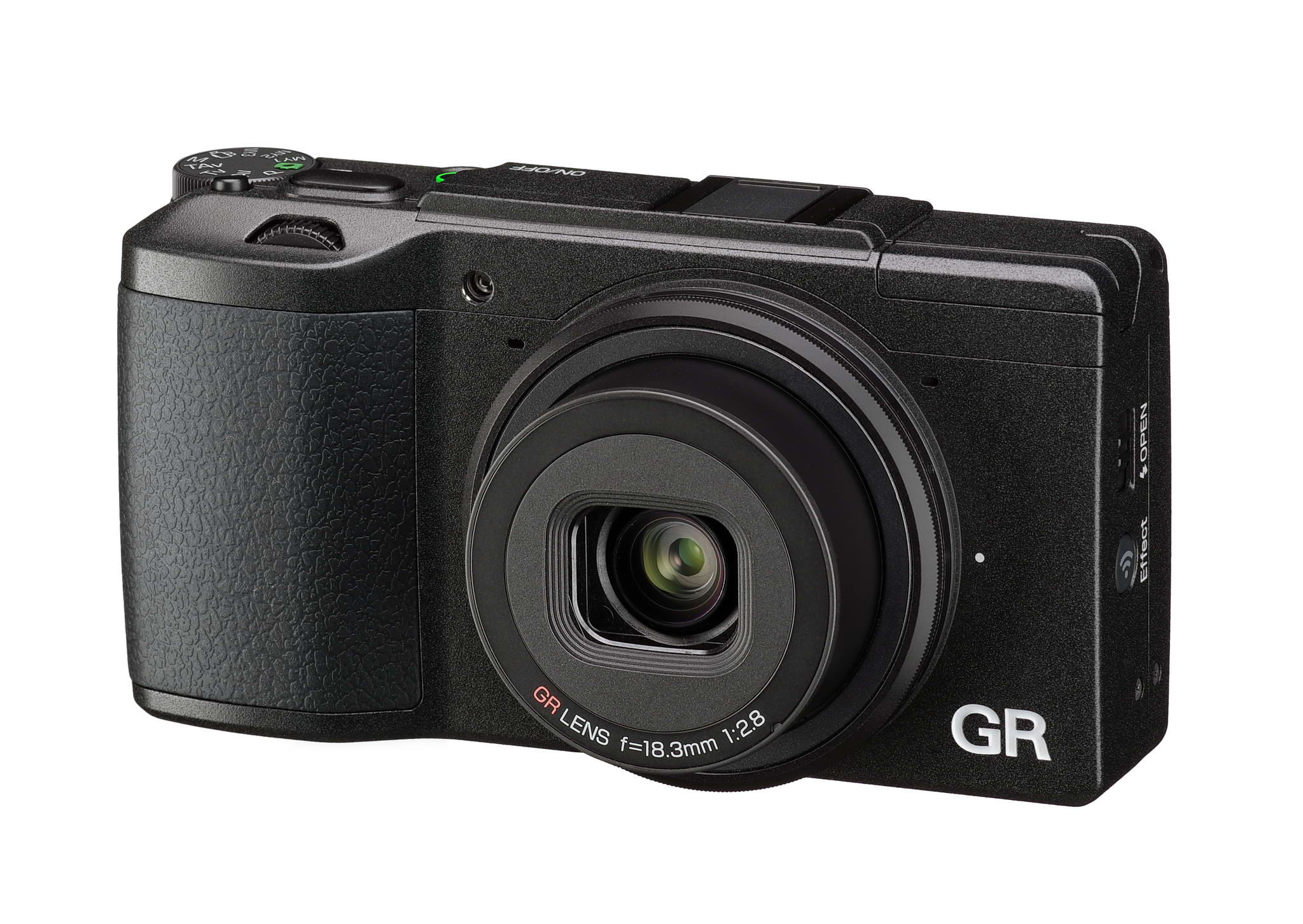 RICOH IMAGING COMPANY, LTD. is pleased to announce the launch of the GR II digital compact camera. This new model combines compact dimensions -- perfect for snapshot photography on the street -- with high-quality, high-resolution images delivered by a large image sensor, equal in size to the one installed on PENTAX digital SLR cameras. It also provides a range of smartphone-support functions, including wireless image transfer and remote shooting.

Developed as the successor to the GR (launched in May, 2013), the GR II inherits the product concept of the GR series: a perfect balance between exceptional image quality and outstanding portability. It is also the first GR-series model to feature Wi-Fi and NFC (Near Field Communication) functions for easy pairing with smartphones and other mobile devices. It provides outstanding basic specifications, including: a high-performance lens, acclaimed to be the best in GR history; a large, APS-C-size CMOS image sensor; the high-performance GR ENGINE V imaging engine. Its imaging power has been further upgraded by reprogramming the white-balance algorithm to improve the precision of AWB (Auto White Balance) control and fine-tuning the compensation program to prevent high-sensitivity noise. It is designed to accommodate a wider variety of scenes and subjects by adding new creative tools, such as six effect modes and a wireless flash discharge function in combination with an external flash unit.

The GR II provides the user with a choice of two applications to support different purposes or photographic styles: GR Remote is a new GR II-dedicated application that allows easy setting of various commands using a mobile device's screen, just like on the camera's LCD panel; and Image Sync, incorporated in PENTAX digital SLR models, makes it easy to transfer recorded images to another device and browse them on its screen.

To commemorate the launch of the GR II, RICOH IMAGING will market 2,000 units of the GR II Urban Leather Set*. This limited-quantity, three-piece set consists of the GR II camera body, a case created from supple, broken-in horse leather, and a hand strap made of the same horse leather and featuring a design similar to a watch's buckle for easy adjustment of length.

* The camera's design and specifications are identical to those of the GR II standard model.

(1) The GR II features a compact, high-performance GR lens with a focal length of 28mm (in the 35mm format). This lens incorporates two high-precision aspherical optical elements and a high-refraction, lower-dispersion glass element to minimize distortions and chromatic aberration, while reproducing sharp, high-contrast images even at edges of the image field. Thanks to its crisp image rendition (even at the maximum aperture of F2.8) and its faithful image reproduction against backlight, the user can truly enjoy the charm of a unifocal lens.

(2) Thanks to its nine-blade iris diaphragm, the lens creates a truthful sense of depth and a natural bokeh (defocusing) effect, while allowing the user to capture beautiful light beams at closed-down apertures.

(3) Thanks to the incorporation of an ND (Neutral Density) filter, which can be operated manually or automatically, this lens allows for the use of the open aperture even under sunny, bright skies. It adds a new dimension to photographic creativity in outdoor shooting.

(2) By coupling the large image sensor with the high-performance GR ENGINE V imaging engine, the GR II provides a top sensitivity of ISO 25600. By reprogramming the AWB algorithm, it assures more precise white-balance control under artificial lighting such as fluorescent lights, while reducing the color bleeding of green hues in outdoor shooting. Also by fine-tuning the compensation program against high-sensitivity noise, it improves image quality and enhances resolution and contrast, while minimizing annoying noise.
As the result, it delivers high-quality images with a truthful sense of depth and a beautiful bokeh effect.

(3) The GR II features an image sensor ensures the best performance of the GR lens.
By eliminating an anti-aliasing filter to enhance resolution, it optimizes the potential of the lens to deliver sharp, high-quality images even at edges.

3. The first GR-series model to feature Wi-Fi and NFC functions

(3) GR Remote has been developed exclusively for the GR II. This browser application supports transfer and browsing of recorded images; remote shooting while checking the scene using the camera's live-view function; adjustment of aperture, shutter speed and ISO sensitivity, and even display; and adjustment of the camera's detailed menus on a mobile device's screen.
It also provides a function that resets all settings at once. This application enhances the outstanding operability and customization symbolic of the GR series.

(1) The GR II's high-speed AF system captures a subject in focus in a mere 0.2 seconds,* thanks to the optimization of its lens drive mechanism and AF algorithm and the high-speed readout of image data obtained by the image sensor. It also provides a very short start-up time lag of approximately one second. These features allow the user to capture once-in-a-lifetime shutter opportunities in sharp, crisp images.

(2) Thanks to high-speed continuous shooting of approximately four images per second, the GR II preserves the decisive moment of a fast-moving subject in sports and animal photography. Thanks to its increased buffer memory capacity, it continuously captures as many as 10 images in a single sequence during RAW-format shooting.

(3) Even when the GR II is set in the playback mode using an extended push on the playback button, the user can instantly shift to the shooting mode by pressing the shutter release button half way down.

* Measured in compliance to CIPA standards.

(1) Even though it incorporates a host of Wi-Fi functions, the GR II comes in the same size as the GR. Its exterior housing is made of lightweight, high-rigidity magnesium alloy, while its grip is shaped for easy, comfortable hold. Overall, the GR II inherits the basic design scheme of the acclaimed GR series.

(2) The GR II features a control button layout that enables simple one-hand operation. On its side panel, it provides the Wi-Fi + Effect button, which double-functions as a Fn (Function) button. As was the case with the GR, the user can assign the aperture preview function to this button to check the depth of field before shooting.

(4) When the user sets the C-AF (Continuous AF) mode using the AF function switching lever and the AF button, the GR II continuously keeps focusing on a moving subject as long as the AF button is being depressed. The user can also program the GR II to activate the high-speed continuous shooting function simultaneously.

(5) The GR II provides the innovative TAv (Shutter and Aperture-priority AE) mode, which is also featured in PENTAX digital SLR cameras. This mode automatically selects the most appropriate sensitivity for a given scene or subject when the user sets desired aperture and shutter speed.

(7) Despite its large-aperture lens, the GR II features a lens barrier mechanism that automatically opens and closes, allowing the user to swiftly react even to unexpected shutter opportunities.

The GR II provides a total of 17 effect modes, which allow the user to apply a variety of image processing within the camera to create the desired visual expression. Including Clarity and Brilliance, six modes have been newly added to the selection, allowing the user to adjust some parameters to the desired level. The user can set the desired mode simply by pushing the Effect button on the camera's side panel.
New effect modes

(1) Clarity: Compensates the subject's texture and unevenness. The level of tone, clearness, saturation and vignetting is adjustable.

(2) Brilliance: Compensates the subject's luster. The level of luster, saturation, contrast, sharpness and vignetting is adjustable.

(3) Bright: Creates an image with enhanced colors. The level of saturation, contrast, sharpness and vignetting is adjustable.

(4) Portrait: Creates a color scheme ideal for the subject's skin tone. The level of saturation, contrast, sharpness and vignetting is adjustable. The focus mode is set at Face Detection AF.

(6) HDR Tone: Creates a painting-like image by emphasizing contrast. The level of tone, saturation and vignetting is adjustable.

7. A full range of shooting functions

(1) The GR II provides an in-camera RAW data development function. After shooting RAW-format images, the user can adjust a variety of parameters within the camera, and output them as JPEG-format image files. The GR II now offers a choice between Normal and Original modes for the peripheral brightness level setting.

(2) The GR II provides an Interval Composite function, which captures a series of night sky images at a fixed interval, then extracts only highly bright areas from each image to composite a single image. The GR II now allows the user to save the image as a RAW-format file, and use it for RAW-data development to create more artistic images. This function comes in handy when the user wishes to capture a nightscape with traces of the moon and stars in the sky.

(3) The GR II comes equipped with a wireless flash discharge function. Since it triggers a compatible accessory flash unit designed for PENTAX digital SLR cameras* from a distance, it simplifies creative flash settings in studio shooting.

(4) The GR II now features a CTE (Color Temperature Enhancement) mode for white-balance control, making it possible to emphasize a predominant color within the image, such as the red in sunset scenes.

(5) The GR II's Dynamic Range Compensation function minimizes white-washed highlights and blacked-out shadows by compensating the brightness level pixel by pixel and reducing the boundaries between areas of varying luminance levels. As the result, the GR II delivers rich-gradation images with fine details.

(6) The GR II l also provides an Auto Macro function** that detects the subject's distance and automatically switches to the Macro shooting mode in close-distance shooting, and a Face Detection AF function*** that captures a beautiful image of the subject's face with very little effort.

The GR II captures beautiful Full HD movie clips (1920 x 1080 pixels, 16:9 ratio, 30 frame rate) in the H-264 recording format. By teaming this function with the GR lens and the large image sensor, the GR II assures high-quality movies. During movie recording, the user can also adjust exposure compensation and use the AF button to activate the AF operation, whose speed is faster than before. Three new effect modes (Bright, Portrait and Vibrant) can also be used in movie shooting.

* The size of recorded pixels is fixed at M for the 35mm setting, or at S for the 47mm setting.

* Recording capacity shows approximate number of shots recorded during CIPA-compliant testing.
Actual performance may vary depending on operating conditions.
** According to the result of our in-house testing.

** The maximum recording time per shooting is 25minutes or the equivalent of 4GB.